RS was established in 1976 under the name of "Rose Sound" to start with jukebox production and cassette-tape recording business. It subsequently changed to music production under the name of "RS Sound Limited" in 1982. For over 40 years, from music business to comprehensive entertainment production and later acquiring various media channels e.g. printing, radio and television channels, the Company also diversify into various marketing production, music, drama series, movie and other contents supplied to large national media companies. In 2003, RS was listed on the Stock Exchange of Thailand and was renamed to "RS Public Company Limited” up to the present and that is a beginning of fully integrated media company.

In March 2019. RS stock was reclassified the sector from “Media & Publishing” to “Commerce” to be in line with expanding into the new business called Multi-platform Commerce which owns both product brands and distribution channels. This business is operated by Lifestar Company Limited (“lifestar”), which is 99% owned by RS.

Q : What is the main business for RS?

RS operates and generates revenue from 3 main businesses, including:

The Company and its subsidiaries will pay a dividend not less than 50 percent of net profit after tax and legal reserve. However, the Board of Directors may consider and decide not to follow this policy, or revise the policy in order to maximize the benefit to the shareholders.

Q : What crucial terms and conditions do apply to warrant series 3 ("RS-W3")?

Q : What is the Company’s plan for its treasury (repurchased) stock after end of resale period on 30th May 2019?

The Company will propose to Board of Directors meeting to approve paid-up capital reduction by writing off totaling 43,273,300 treasury registered shares.

Q : When does the Company hold Annual General Meeting of Shareholders (“AGM”)? How does RS’s shareholder receive a notice of AGM? In the event that a shareholder cannot attend AGM, how should

By virtue of Section 98 of the Public Limited Companies Act B.E. 2535, the Company must arrange AGM within 4 months from the last day of its fiscal year which is 31st December. Therefore, RS’s AGM is usually held in April every year. The Company will distribute an invitation of AGM to the shareholders during March to April of each year. Also, the invitation and each type of proxy form will be published on the Company’s website for downloading accordingly.

In case a shareholder is unable to attend AGM, he/she may appoint a proxy to attend the meeting by using a proxy form as attached to the invitation of AGM or downloading the form from the website investor.rs.co.th. The proxy does not need to be a RS’s shareholder. A grantor must appoint only one person to attend and vote for in the meeting, cannot split the number of shares to more than one proxy. Otherwise, a shareholder is able to appoint an independent director of the Company to vote on behalf of the shareholder.

Q : What channels can investors/shareholders contact IRO if they need any further information? Notification of the Company's additional holiday for the year 2020 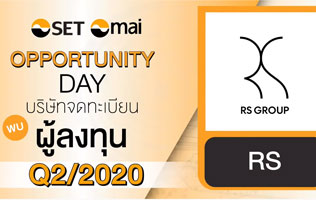 Notification of the exercise of RS-W3